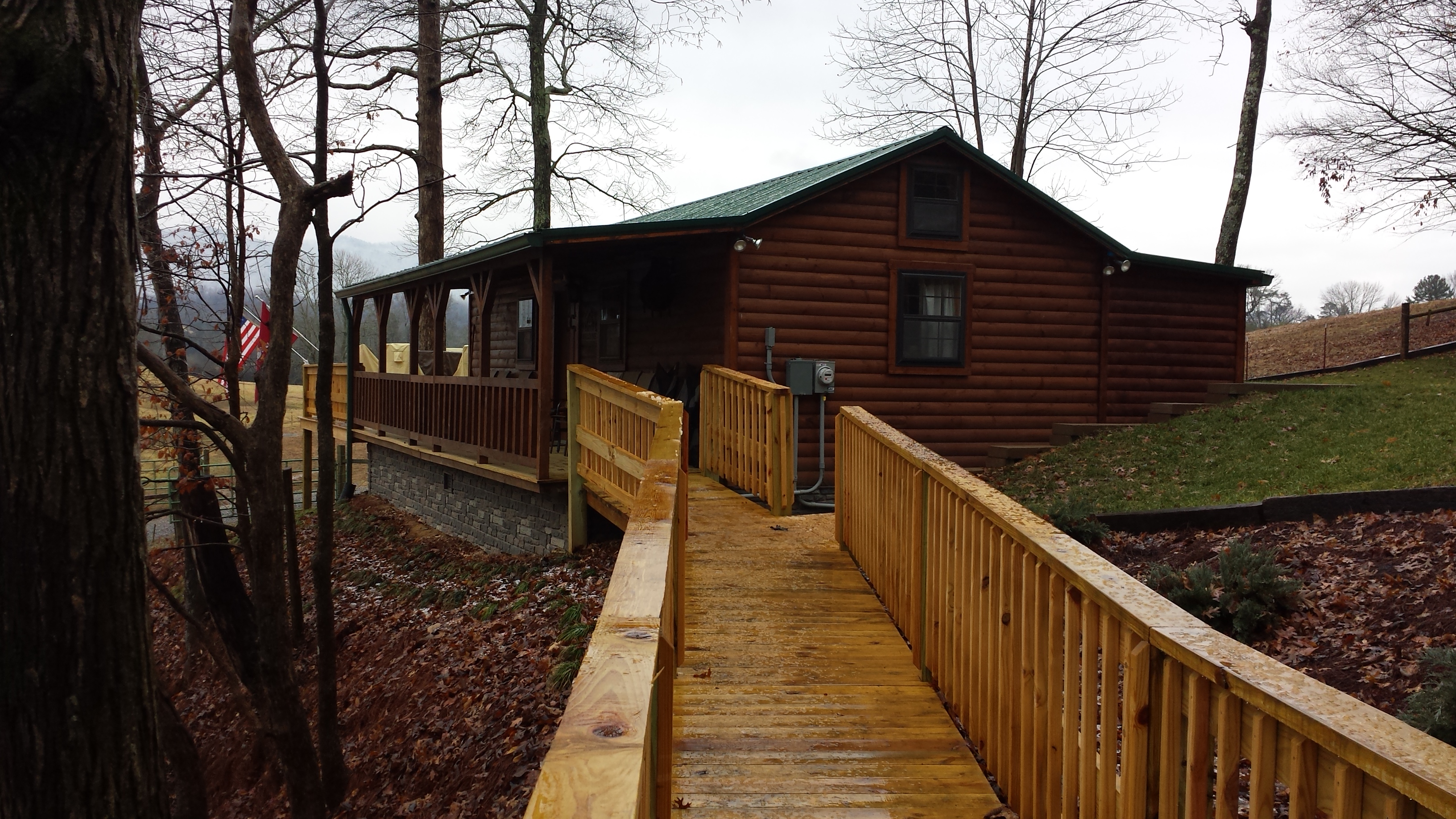 Grandchildren slumber parties. Reunions and suppers. Family times and quiet getaways. It’s all happening at the Cunninghams’ new cabin on their 90-acre horse farm at the foothills of the Smokey Mountains.

A cabin on the farm is not new to the family. Jerry Cunningham and his sons built a “shack cabin” on a bluff overlooking a small stream about 30 years ago. “When the kids were young, they would spend one night every weekend down there,” says Jerry, a retired lawyer.

Over the years, raccoons and varmints took over the place. Then Jerry’s son suggested, “Why don’t we build another cabin for the grandchildren?”

That was what started Jerry and his wife Janis on their search for a quality cabin builder. Knowing something about Amish and Mennonite craftsmanship, they found Hilltop Structures online and drove over to Cumberland Furnace, Tennessee, to check it out.

After meeting the owners – the Dave King family – and learning about their pre-built log cabins, they knew this was the route they wanted to take. “They were just a wonderful family,” Jerry says. “They answered all our questions.”

Over the next months, the Cunninghams worked with the Kings to customize their cabin. “We made dozens of changes it seemed like, and they were very understanding and seemed to grasp any changes.”

The cabin arrived exactly as they had ordered.

“I love the rustic look and the 5/8-inch rope around the windows,” Jerry says. The
windows trimmed in rope was just one of the many extra features they were able to order.

The day the Pioneer cabin with a fold up porch arrived, Jerry had his fears. The cabin would have to be pulled across the stream and up onto the bluff. In spite of an audience of people watching, Dave stayed professional. He and his sons laid 14-inch railroad ties across the stream, and he pulled the cabin across. “It was pretty amazing how he maneuvered it in there and set it up. These people are professionals – they know what they’re doing.”

Since then, the family has built a footbridge over the stream and put in steps leading up to
the cabin.

Inside, the 15′ x 32′ cabin is one big room arranged with beds, a log table and chairs,
sofas, and white cedar furniture. “We can seat quite a few people in there,” Jerry says. Last
summer they hosted a Marine Corp reunion and invited some couples from the Supper Club they belong to. 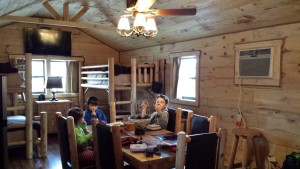 The cabin has already seen a lot of use. “I’ve taken my little grandkids and had a little granddad party,” Jerry chuckles. Some evenings the Cunningham men gather at the cabin to watch the game and other times a grandson brings five or six of his buddies. “We added a bathroom and shower, and the boys come from their football game and use the shower. They are anxious to get out and build a big fire over the fire pit we put behind the cabin.”

Jerry and Janis enjoy quiet evenings watching their horses from the cabin’s 24-foot deck
that wraps around a giant oak. For anyone considering a cabin, they highly recommend Hilltop Structures and the King family. Jerry calls the cabin “craftsmanship at its finest.”

“It’s built solid and insulated well. It’ll be there a lot longer than I’ll be on this earth.”

That means there is time for the Cunningham family to make many more cabin
memories.